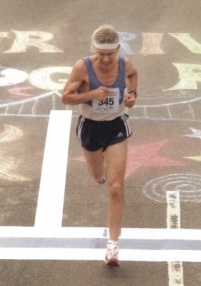 Another operation to deal with.

This photo was taken crossing the finish line at the 2005 Cooper River Bridge Run. I won the 55-59 year age group that year. I guess you could say the good, old days.

I went ahead with the surgery to repair my left side inguinal hernia a few weeks ago. The laparoscopy option left me with much less pain, but it was still no picnic. I was able to do a slow two and a half mile jog four days after the surgery. That was not possible ten years ago when I had the open surgery – a long, four inch incision – for the right side hernia.

Now I have a new nemesis to deal with. My right hip is giving me problems. I felt a slight pain when I was biking, but it was so slight I didn’t think about it. After I did the slow jog, it began hurting more. Two days later I went for another jog, and the pain got worse, so bad that I could hardly walk the next morning. I let a few days pass and tried another jog. This time the pain was intense. So now I’m headed to the orthopedist. I read about all the things that can cause hip pain, most of them not good.

Now I’m wondering if I will ever be able to get back to running. I was going to go ahead with the custom orthodics, but I’m going to put that on hold until I get a determination on the hip. Getting older is definitely not fun. I am going to set up an appointment today. I’ll keep you all posted.