A New Issue Has Come Up 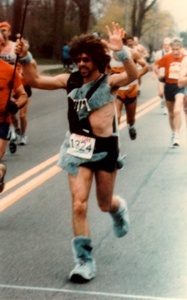 This photo was taken of me running the 1986 Boston Marathon. Obviously, it was not a serious race for me.

After I was diagnosed with trochanteric bursitis, I followed the recommended exercise recommendations to the letter. After months of doing those exercises, the hip still hurts. It’s still a major issue. So much for those.

I decided to give biking a try. I built up my time slowly, and before long I was riding an hour or more a day at a fairly good pace for an old guy. On a hard day I was averaging 20 mph. The biking did not hurt my hip.

On December 28, 2012 I was diagnosed with a DVT (Deep Vein Thrombosis) in my left calf. My doctor immediately put me on the new blood thinner Xarelto. My hematologist is classifying the clot as provoked, so I am having lots of blood work done as well at a CAT scan and X-rays. They are attempting to figure out what caused this to happen.

Due to the blood thinner, I decided to give up biking. If I took a serious fall and suffered a head injury, I could bleed to death. Xarelto has no counter agent to start the clotting process.

A few weeks ago I started walking four to five miles a day. I had to do something. The hip still hurt, but I could tolerate it. After a week of power walking I tried to add a little very slow jogging. I would walk 200 paces and then slow jog 200 paces. That didn’t do the hip any good. It started hurting more and more. So now I am back to walking.

My other option is to buy a professional stationary bike to use in the house. It may come to that. Its a boring way to go, but it is an option.

I have to see what they discover, if anything, from all these tests. That will determine what happens next.

After all my years as a competitive runner, I never thought I would end up in a position like this. I don’t know if I will ever be able to get back to running, much less racing. I really miss it!